Posted in Solds
no comments yet

Posted in Solds
no comments yet

Posted in Home Listings, Pending
no comments yet

1. You're looking at a group of listings at www.LiveByTheGulf.com and you'd like to re-sort them.

2. There are four ways to sort listings. Choose Lowest Price to Highest. 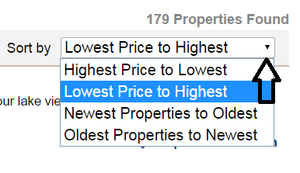 Posted in Tutorials
no comments yet

Customer in CT is sharing Bob & Jen's business card while boating with friends. 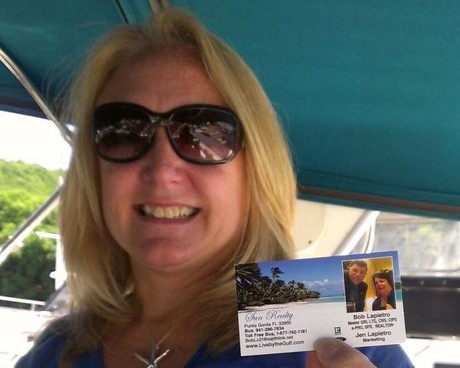 Posted in Testimonials
no comments yet

In 2011 we scheduled a ten-day house-hunting vacation in Florida. That spring, Bill had been browsing real estate listings from our home in New Hampshire and settled on waterfront living in Port Charlotte. He soon discovered the most easily browsable real estate site in the area: LivebytheGulf.com, hosted by Bob and Jen Lapietro. Here was a site we could live with! You didn’t have to register, suffer phone calls from heavy-handed salesmen, or struggle to navigate this site. Bob Lapietro did call us, but he wasn’t too hard sell and consistently sought to connect us with listings that would interest us. Before we even arrived in the Sunshine State, Bob and Jen had visited, and Jen had taken hundreds of photographs of, one property for us.

Bill and I had targeted two properties to begin with, based on our criteria that they have 3 bedrooms, a pool, town sewer, and saltwater canal frontage. I had found one that was quirky and cute, which we both liked a lot; Bill had found another that had attached rental apartment potential.

Our first stop was at Bob and Jen’s office, where they familiarized us with the area and we exchanged small-world stories about people and places we both knew in the Boston area. Then off we went to view the first place.

The former owners had added a great deal of personality, original decorations, interesting paint. We all loved it. I even wanted all the people's "stuff” too. We talked to a lovely neighbor, whose sister had once lived there and loved it. This was great! And my totally unreliable house-choosing barometer kicked into action; I cried when I looked at the pool area, backyard, and canal stretching off into the distance. Just because we'd planned to and it was around the corner, we did go see the second home, a prime example of a project that had run out of money partway through. The interior was relentlessly white and cold, so much so that I referred to it afterwards as The Refrigerator or The Morgue.

So, after the weekend, we made an offer on only the first house we'd seen and scheduled a home inspection for the next day. We were in full celebration mode! That is ... until we walked around with the home inspector, a gruff but thorough fellow who spent more time shaking his head and muttering than talking to us. I finally pleaded with him to clarify what he was muttering about, and the gist of it was that half the place hadn't been built to code, was likely to be carried off by termites, could implode from faulty electrical wiring, and would, in short, be a huge mistake. Bob and Jen were crushed. We were crushed. We withdrew our offer. The sellers pleaded in return: “What would it take for them to buy it?” Nothing would do. We were out of there and thinking about condos which would require no work whatsoever.

Unfazed by our turning away from what had looked like a sure-thing sale and commission, Bob and Jen had sent us a sheat of listings for condos by the time we returned to our hotel room that afternoon. It didn't take us long to realize that we would not enjoy living in a box, enduring rules, having to hang out at a community pool with other people we might not like, and basically not owning our own plot of land.

We revised our requirements, dropping canal from the criteria and relenting on the no-septic issue. I went back online and came up with a couple more ideas, as did Bob and Jen. We had only a week in Florida for house hunting, we were going to make the most of it, and they were 100 percent behind us, bless their hearts.

The next morning we and Bob headed out with a goal of whirlwind-viewing five different places--close to the limit of what a human being can absorb and make an informed decision about in one day.

When we got there, Bob was annoyed to discover that the selling agent hadn't provided a way to enter the house. While he tried to phone him, we decided to check out our nature preserve, at the bottom of the backyard, on the other side of a posted barbed-wire fence.  It was indeed a swamp, where we could see egrets wading. All quite picturesque.  Until …  Bill started swatting himself and doing a little dance. This was not an expression of his delight with the place. He had been swarmed and was being eaten alive by Florida no-see-ums! We fled, in a cloud of the things, back to Bob's car. Unfortunately, some of them accompanied us into the car, where all of us continued swatting wildly as we rocketed off in a cloud of dust.

In between swats, I put a big X through the listing printout.

Still undaunted by our disappointments, we got right back out house hunting the week of July 4th. The indomitable Bob and Jen showed us 6 or 7 more properties that passed in a blur. One was so utterly pink (exterior, all interior walls, bathroom fixtures, deep pink wall-to-wall) that I thought I'd walked into Barbie's Dream House. We looked at each other and said, "It's okay, but it's so ... pink.!"

Another vast, sad foreclosure sported hunks of carpeting ripped out at random, holes kicked in the wall, and other demonstrations of foreclosed-owner ire. It had a bathroom to die for, with a huge shell-shaped jacuzzi, but you can't live in a bathroom, can you?.

I loved one with a garden, fountain, and paving stones built in around the pool like ahotel lobby. But, shining the light of reason on the deal, Bill pointed out that there was only 1 guest room, which would leave me no room for an office.

Another was fully furnished in Florida style, big, nice pool. Bill loved it, but I would have felt like I was living in somebody else's house. We nearly threw in the towel over this difference of opinion.

Bob had two more properties to show us, hours before we were due to depart. One was lackluster, whose owner devoted more attention to his man-cave in the garage than to the rest of the house.

I swear, the very last house we looked at, on the day we were leaving, was (a) the lowest in price; (b) entirely renovated inside--all new paint, carpeting, appliances, electrical fixtures; (c) graced with a kidney-shaped pool with green and gold tiles, and a huge lanai; and (d) featuring a pass-through window from the kitchen to the lanai, where Bill would henceforth receive his tea from me in the morning.

We wondered what the catch was, but it turned out that there really wasn't one. It passed the home inspection, except for the usual few things to fix, and we made a deal.

Bob handled all the paperwork for us without a hitch, sat in on the closing in our absence, supervised pool cleaning, roof repairs, septic pump out, and an exterminator, among other details, before we moved.  After we moved in, Jen loaned me a work desk and wi-fi stick so that I could work until our Internet was set up and our Pod of furniture arrived, nearly two weeks later.

How many Realtors would also host a once-a-week dinner get-together and make newcomers like us feel at home?  Bob also happens to be a notary, so he even married us a month after we moved into our home!

Two years later, we remain friends and would (and do) recommend Bob and Jen—the Realtors who go above and beyond--to anyone!